There has been a lot of talk recently about politics in comics. You can find dozens of articles lambasting and praising increased representation in comics; from Image releasing variant covers to support Planned Parenthood and Marvel’s “new” heroes such as Kamala Khan and Miss America, what some see as progress others have taken as the ‘destruction’ of comics.

But is there really any basis for politics in comics? Should publishers and creators “pick a side”? Or should they shut up and keep their politics out of our comics?

Comics is a medium used to express ideas by images, often combined with text or other visual information

and, what politics/to be political mean(s):

The political opinions or sympathies of a person:
the total complex of relations between people living in society:
relations or conduct in a particular area of experience especially as seen or dealt with from a political point of view. 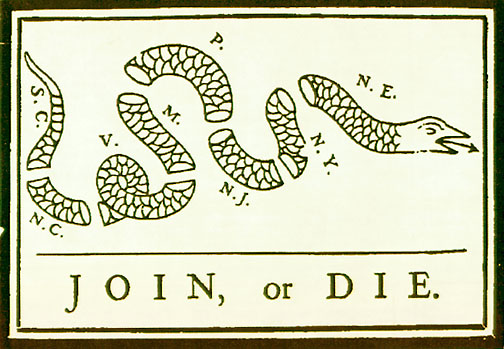 Editorial cartoons, otherwise known as political cartoons, were the first comics, often seen in papers. They played an influential role in the early days of America, inspiring union and federalism among readers. Some of the earliest known examples of American editorial cartoons depicted images of King George in rather unflattering situations. Even founding father Benjamin Franklin created his own editorial cartoons, including the famous Join or Die editorial, seen on the right.

Here is a short piece on the most influential editorial cartoons.

Comics in this era consisted of folk tales, satire, and sometimes crude humor, they were written for the working man and like oral tradition of the time often made jokes about the hardship of life. Which probably explains why Mr. Obadiah Oldbuck tries to kill himself after every failure.

Yellow Kid first appeared in 1895 as part of Hogan’s Alley [3]. Used as a very successful tactic to sell more papers, Yellow Kid, created by Richard Outcault, hung out with a ragtag group of kids in the ‘slums’ of New York and eventually was used in advertisements. Mary Wood, of the University of Virgina, suggests “Outcault managed to mock all classes in his comic, offering a safe environment to laugh at American foibles, while still excluding African-Americans from the joke. Americans embraced the Yellow Kid during a time when commerce became central to the American way; the comic grew popular on the pages of two of the leading newspapers, and even influenced another “clean” newspaper editor to name the papers’ explicit reporting of New York City urban life “yellow-kid journalism,” further demonstrating upper-class anxiety over the vulgarization of newspapers and entertainment. In fact, many Americans across the country read or knew about the Yellow Kid, although yellow journalism may have been especially popular with the working class or anyone who identified with “the little guy,” whom it so often claimed to champion..” [4]

IT’S IMPORTANT TO NOTE THAT EARLY COMICS AND EDITORIALS, ALTHOUGH CREATED FOR LOW AND MIDDLE-CLASS FAMILIES, WERE WRITTEN FOR A WHITE AUDIENCE. History, in general, is pretty offensive and the history of comics is no exception. While comics have generally always been political in nature, they’ve mostly been political for one group of people.

The comic as we know it first appeared in 1933 and not long after, in 1938, Action Comics introduced their new character, Superman.

Superman brought wider readership to comics and at the onset of World War II, though still in its infancy, comics did what it could to vilify Germany, Japan, and Italy while showing off their patriotism.

Created by Joe Simon (Hymie Simon) and Jack Kirby (Jacob Kurtzberg), Captain America was made to fight the Nazi menace. Throughout WW2 private corporations and the US Government released tons of propaganda disguised as comics, including The Nightmares Of Lieutenant Ichi or Juan Posong Gives Ichi The Midnight Jitters. The practice of using comics as propaganda continues to this day and was even used in Iraq and Afghanistan. [5][6]

Comics continued with the theme of superheroes well into the 60’s, then in 1970, the Bronze Age of Comics began. Creators started to write about topics such as drug abuse, racism, pollution and even poverty. Average everyday people became Superheroes and the problems weren’t intergalactic or magical, they were real world problems. Problems that while applicable to some poor white communities, spoke directly to issues surrounding the War on Drugs. A disastrous campaign that increased incarceration rates as much as 500% of what they were in 1970. With an alarming disproportionate amount of those incarcerated being black men. As of 2001, 1 in 3 black men will go to prison in their lifetime. [7]

The end of the bronze age of comics is most well-known for popular releases like Alan Moore and Dave Gibbon’s Watchmen, Frank Miller’s The Dark Knight Returns and of course Secret Wars, which marked a new era, the modern age of comics. Also called the dark age of comics due to the popularity of serious content and more artistic freedom that had become the norm during the bronze age. Horror and terror, long banned from comic titles, was quickly becoming acceptable. Groundbreaking comics like Swamp Thing, Sandman and Preacher paved the way for unheroic stories and characters. The anti-heroes were quickly becoming everyone’s favorites, created in 1960, X-Men received wide readership and praise at its release. By the 1990’s X-Men was Marvel’s best-selling comic, setting an unbroken World Record with270 million sales. X-Men is one of the most seemingly political franchises ever.

We shouldn’t box the very real oppression faced by people of color in America and around the world with the kind of oppression the X-Men face [8], we can draw parallels and X-Men is undoubtedly about loving the skin/or power you were born with despite the oppression you face, an inherently political act, especially if that skin is blue.

Join me for Part 2 of The History of Politics in Comics as we take a deeper look into the politics of X-Men and the implications of mutant and superhero registration acts.

I grew up on Star Trek, X-Files and the Hobbit. I fell in love with Star Wars, then Stargate followed by Firefly and Doctor Who. Then Skyrim came and no fantasy stone was left unturned. My love of all things comics started sometime during all of this on family vacations to Universal and with a single book. From then on it has been a healthy downward spiral into geekblivion. Now I cosplay, play Dungeons and Dragons and write about comics. View all posts by Lvl 41 Rogue